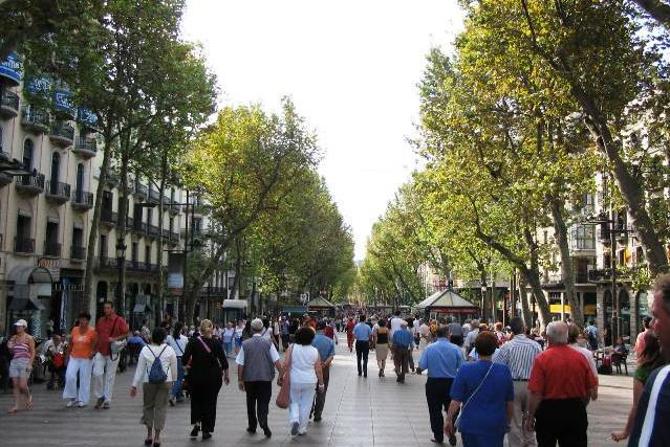 La Rambla is a 1.2 kilometer long boulevard in the center of Barcelona, it is the one place that all visitors are bound to pass through on a visit to the city. The middle section of the boulevard is pedestrian-only. Along the route which stretches from the Canaletes fountain to the Columbus Monument there are many historic buildings like the Liceu theatre. The boulevard began as a small river which flowed just outside the city walls. A university and several convents lined the banks of the river. When the city walls were taken down the buildings found themselves lining the dried up river. The boulevard was laid in 1766 and the old buildings were torn down, however each of the 5 sections of the boulevard was named after the buildings which once stood there. Because the boulevard has 5 sections it is often referred to as Las Ramblas.

In a city where the streets are rather narrow this one is wide.  The boulevard soon became a popular hang-out and place to see and be seen. The landmark buildings along La Rambla include the Palau de la Virreina and the Boqueria Market. You'll find many tourist attractions along Rambla like the Wax Museum and Erotica Museum as well as street performers, artists selling their paintings and souvenir stores.

La Rambla is part of the Barcelona Hop-on Hop Off Tour: East to West Route. This tour is an extremely convenient way to get to know Barcelona.