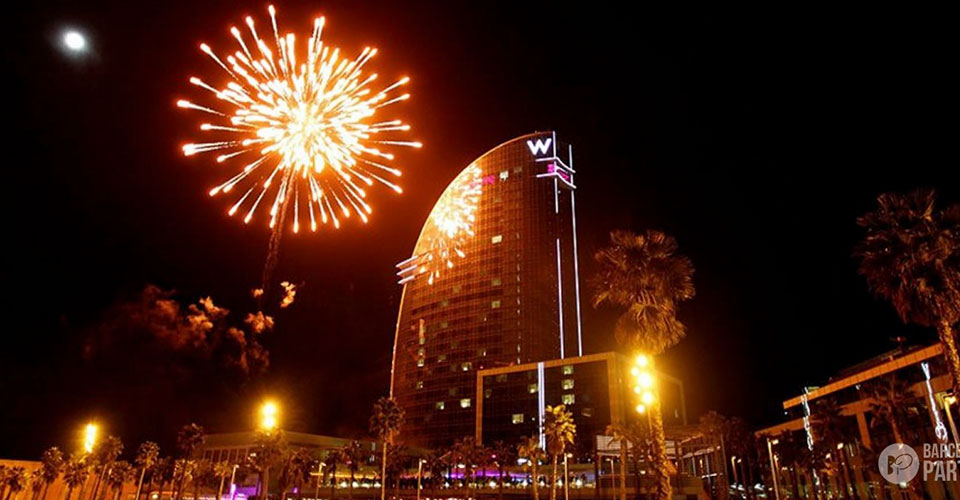 A local's guide to Christmas and New Year in Barcelona

There are few places on earth as festive-feeling as Barcelona's chocolate-box medieval heart over the Christmas period (which here runs until Epiphany, or Twelfth Night).

Even the narrowest of alleyways are bathed in the glow of coloured lights, and entire families step out together to soak up the atmosphere, gaze at the huge nativity scene in Plaça Sant Jaume, and snack on cones of fragrant chestnuts roasted on braziers set up in the streets. The ice-rink in Plaça Catalunya is the big draw for children, and has a tiny practice rink for learners. 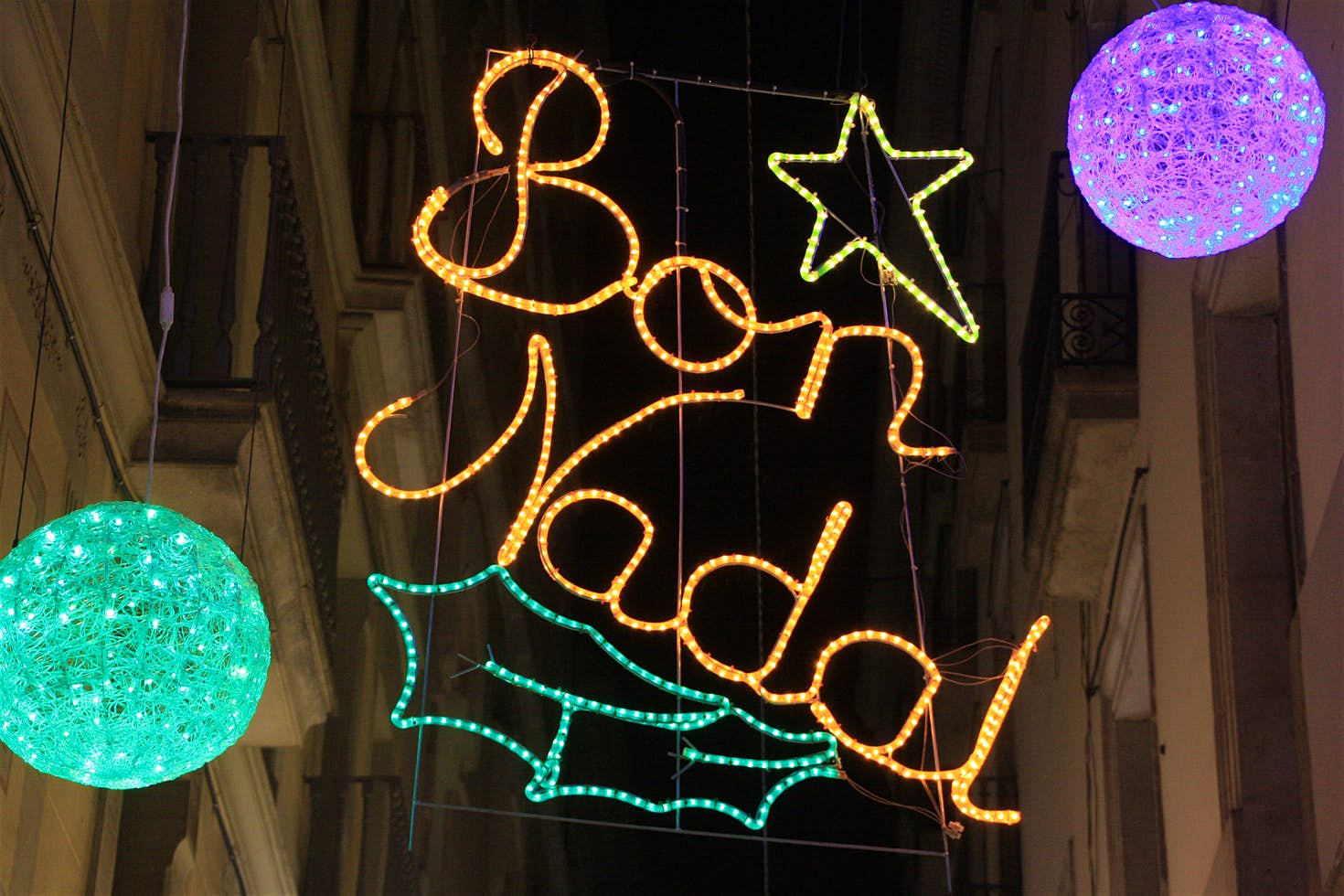 The main shopping streets – Passeig de Gràcia and the Rambla de Catalunya in the Eixample, Portal de l'Angel in the Barri Gòtic – are especially lively, and sumptuously adorned, at this time of year, but for real atmosphere, head to the Fira de Santa Llúcia, the Christmas market that sprawls around the Gothic cathedral. 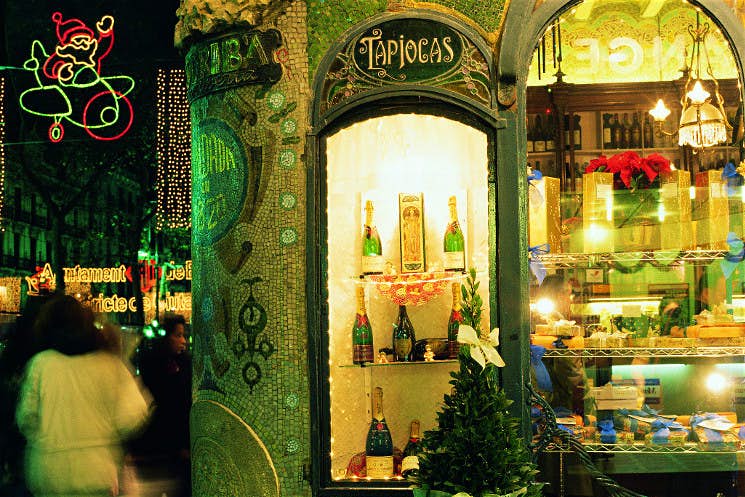 Look out for the caganer (the 'crapper'), whose tiny squatting presence in every nativity scene ensures good luck in the year to come. You'll also see the caga tió ('crapping log' – are you seeing a pattern yet?), a stout branch leaning on two legs, one end painted with a smiley face and wearing a red barretina (traditional Catalan hat). The log is covered with a blanket and 'fed' every night before Christmas, when children beat it with sticks singing a charming little ditty that includes the words 'sh*t, log, sh*t', the blanket is whipped away and lo! The log has defecated a pile of sweets, nuts and small presents. 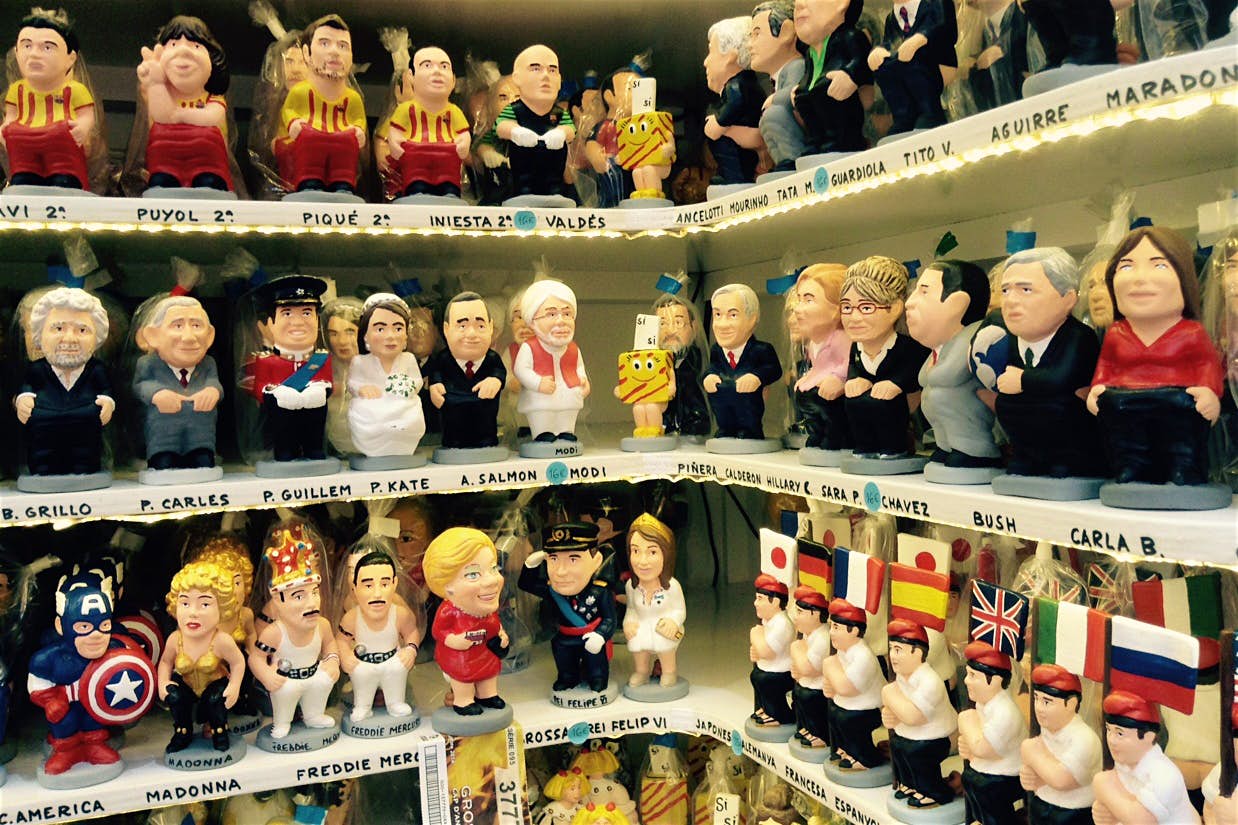 Some familiar faces take on the role of caganer at Christmas in Barcelona. Image by Sally Davies / Lonely Planet

The Spanish are avid fans of the lottery, and almost everyone buys a ticket (or a share in a ticket – it's a fiendishly complex business) for El Gordo, 'The Fat One' on the 22nd December. Top prizes are unimaginably huge, but smaller ones are divided in such a way that the odds are not completely ludicrous. The weekend before Christmas is usually the date for the much-loved annual performance of Händel's Messiah at the elegant basilica of Santa Maria del Mar in the Born, and this is also the venue for the Misa de Gallo (Cockerel's Mass) at midnight on Christmas Eve.

A blow-out family meal usually happens on Christmas Eve (Nochebuena), and while turkey has become more popular in recent years, the classic feast involves a huge lump of meat slow-cooked for hours (carn d'olla), and its stock served first as a soup (escudella), into which are thrown large pasta shells known as galets. Any leftover meat is used for the cannelloni served on Sant Esteve (Boxing Day). Sea bass is also popular, along with a pile of shellfish and a large leg of cured ham, carved table-side. Though there is no traditional pudding, as such, there is inevitably turrón, the thick ingots of nougat that also come in the form of chocolate, marzipan or a sweet and rich egg-yolk confection.

Father Christmas is not the traditional bringer of gifts, that's normally down to the Kings (see below), but he has been known to drop off a few presents of late.

While elsewhere the usual drill is to spend Christmas is with families and New Year with friends, in Spain it tends to be the reverse, and most bars and restaurants will be open, and full, on Christmas day. Many will serve a set meal, although this a generally a slightly fancier version of their usual fare than any specific yuletide dishes. The streets are lively, as are the icy waters of the Port Vell, for the bracing annual harbour swim. 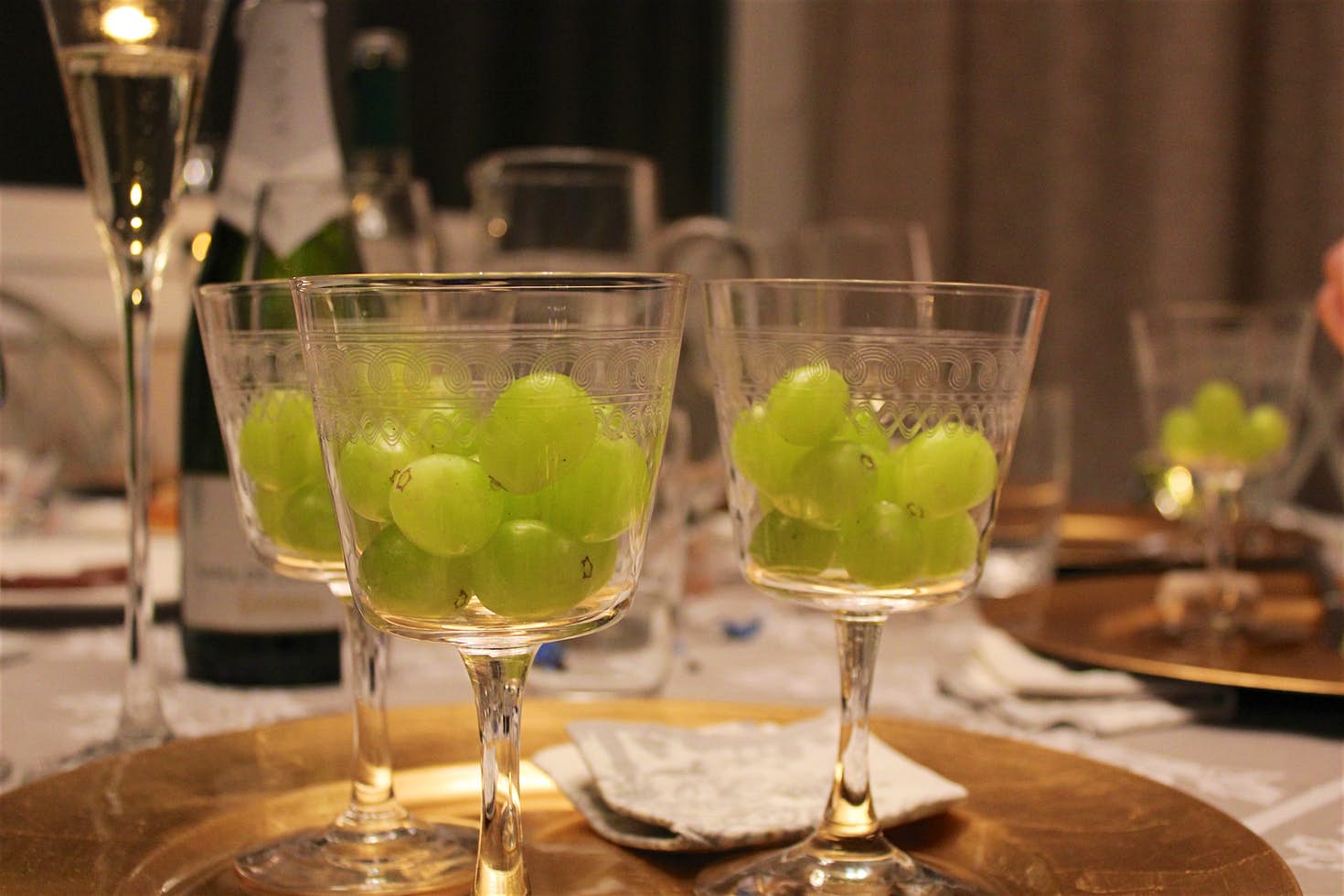 12 grapes for each strike at midnight. Image by Chris Oakley / CC BY 2.0

New Year's Eve kicks off with the Cursa dels Nassos, a not-entirely-serious half-marathon that attracts many thousands of participants. Later on dinner is normally eaten with family, but visitors will find most restaurants open, many serving a special menu – book well ahead if you can. As midnight approaches, check your underwear – you'll need to be wearing red for the best hope of a prosperous 2015. You'll also need to come armed with 12 grapes, which you must stuff into your mouth at midnight, one grape for every stroke of the clock. The best place to do this is the Plaça Catalunya.

After that the fun really begins, and carries on well into the next day. Clubs tend not to get going until 2am or so, which gives you time to scour the bars for entrance flyers, without which admission can be a lot pricier than usual. Arriving before 2am will often get you in at a discount, too.

New Year's Day is a sleepy affair, aside from the brave souls plunging into the Med for the midday Primer Bany (First Swim) from the Club Natació Atlètic (www.cnab.org), free to all and this year celebrating its 20th anniversary.

January 5th (Twelfth Night) is the day all good children look forward to (bad children can expect to find a lump of coal – nowadays generally made of sugar – at the foot of the bed). Round about 5pm, the Three Kings arrive at the port on a masted ship, where they are received by the mayor, and then slowly make their way around the city in a spectacular parade of floats, throwing armfuls of sweets over the expectant crowds. Their pages collect letters from the children containing wishlists of gifts – these are then delivered in the dead of night.